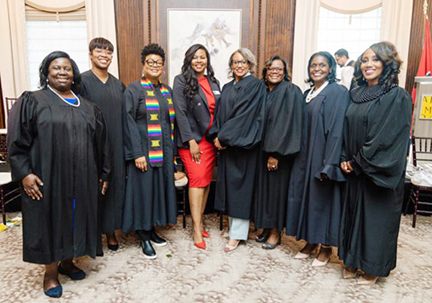 All Rise! Court’s in Session

NASHVILLE, TN — By most standards, it is very important to be orderly in court. Outside the chambers of the Judge A. A. Birch Court on Second Avenue North, however, there was plenty to celebrate this summer on the swearing in of Nashville’s most diverse group of General Sessions Judges in Nashville’s history.

“Diversity not just in background, but in experiences,” said General Session court presiding judge Melissa Blackburn, a graduate of Lipscomb High School and College and the Nashville School of Law. “We have judges who have been in office for a few days and judges who have served for decades. It makes for a unique blend that I believe will serve the people of Nashville well in the years to come,” Judge Blackburn said in an interview about the significance of this election.

“With each election, we see the progress in creating a judiciary that truly reflects our city,” Judge Blackburn continued. “The work of equity is never completely finished but looking at the makeup of the courts only twenty years ago, there is much of which we can be proud. It was a very short time ago that women and people of color on the bench was an unusual occurrence. We have only just elected our first Latina to General Sessions for a full term this year, so there’s always work to do. But our progress is encouraging.”

Judge Blackburn, echoing others interviewed about this new group of court leaders said she has “every confidence” the new members of the court “will bring the same dedication to the bench that I saw them demonstrate with their clients. I am impressed with their professionalism and commitment to applying the law fairly,” said Judge Blackburn, a Nashville native and mother of four.

Judge Blackburn she was asked to offer three tips of advice to her incoming colleagues on the city’s judiciary. She was frank, cordial and candid:

“Remember where you are by honoring the trust the people have given you. As Judges, we make decisions that change the course of lives and much of our authority to make those decisions results from acting ethically and with integrity.

“Respect all who come before you,” she said. “Citizens, attorneys, and each person who appears before the bench deserves dignified treatment and the confidence that you are prepared and knowledgeable of the law.

“Always listen,” she exclaimed. “No one should ever leave court with the belief that they weren’t heard.” 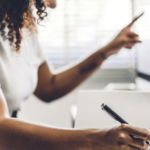 Previous:
Can I Work From Home?
Next:
For Immediate Release Re: Tyre Nichols